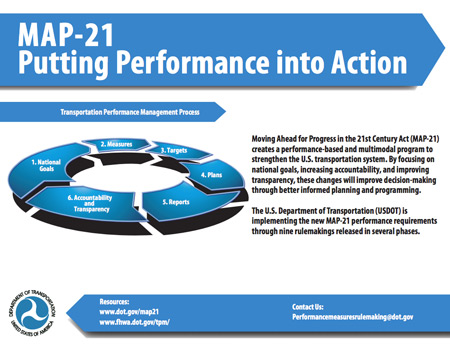 “Transit ridership is rising, public transportation equipment and infrastructure are aging, and there is a growing backlog of transit-related capital maintenance needs with limited funding available,” said U.S. Transportation Secretary Anthony Foxx.  “Better and more efficient management of transit assets is a smart way to get more from our investments while ensuring we maintain the safe, reliable and accessible transit service the American public deserves.”

The proposed rule would require public transportation agencies to develop a Transit Asset Management (TAM) Plan that determines the condition of its capital assets, including the system’s equipment, rolling stock, infrastructure, and facilities.  To reduce the burden on small operators, the proposed rule offers a two-tiered approach for the TAM Plan requirement. Small transit providers operating 100 or fewer vehicles in revenue service and no rail fixed-guideway service and all subrecipients under the Rural Area Formula Program would be allowed to participate in a Group TAM Plan that would be developed by a State or other direct recipient of FTA funding.

The Moving Ahead for Progress in the 21st Century Act (MAP-21) directs FTA to create a TAM System to help transit agencies achieve a better and more informed balance between system preservation and expansion projects, with a strong focus on improving safety.  The TAM System is intended to provide a transit agency with a comprehensive understanding of how the condition of its capital assets may impact the safety of its system.

“Strategic and targeted investments to replace and rehabilitate aging transit infrastructure are needed to bring the Nation’s bus and rail systems into a state of good repair,” said FTA Acting Administrator Therese McMillan. “Given the diversity of transit systems, from complex urban networks to small operators in rural communities, the proposed rule offers a flexible approach for public transportation providers to better manage and maintain their assets.”

The proposed rule would also define the term “state of good repair,” establish state of good repair performance measures, and have transit agencies set performance targets based on those measures, which they can then use to prioritize limited capital investment funding.  In addition, transit agencies would be required to report new information to the National Transit Database.

Insufficient funding combined with inadequate asset management practices have contributed to an estimated $86 billion transit in state of good repair backlogs nationwide that continues to grow with reduced levels of investment.  To address this need, the Administration’s multi-year transportation funding bill, the GROW AMERICA Act, proposes a total of $7.6 billion in fiscal year 2016 to support FTA’s state of good repair efforts, with incremental increases in each fiscal year through the end of the Act’s authorization period.

Public comments on the proposed rule are accepted through Nov. 30, 2015.

YOU CAN FIND US AT: